Costello was in town over the weekend to play a benefit concert for the new Musician Treatment Foundation at the Parmount Theatre. He’ll give the induction speech for Rosanne Cash and will be among the musical performers paying tribute to her, along with Neko Case and Ry Cooder.

Dr. John will take part in the tribute to inductees the Neville Brothers, which will include band members Ivan and Art Neville as well as fellow New Orleans musician Trombone Shorty.

This year’s posthumous inductee is Roy Orbison, with show emcee Chris Isaak doing the induction honors as well as performing along with Raul Malo and Brandi Carlile.

Limited tickets, $50-$300, are still available via acl-live.com. Like last year, the show will be taped for PBS broadcast on New Year’s Eve.
Top

This has got the word fantastic written all over it!
Love is the one thing we can save
Top 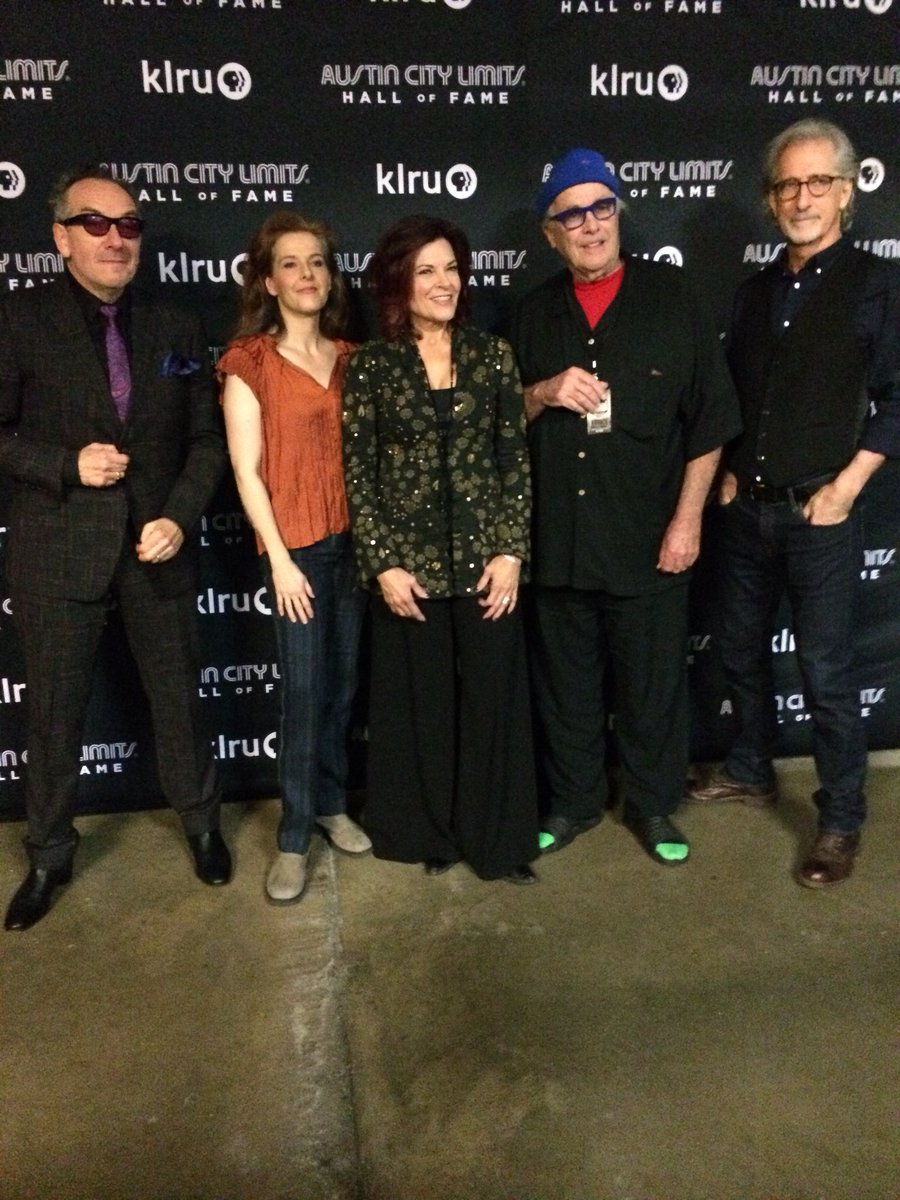 It was a beautiful, healing, inspired, loving, heartfelt tribute; this dream team came together for an extraordinary set. On PBS NYE!

More photos from last night and from the rehearsals for the show:

Boy, I would enjoy listening to a Delivery Man style album with Elvis and Ry Cooder.
Who put these fingerprints on my imagination?
Top

This visually goes a long way toward explaining his seeming antipathy toward going the digital route with his music.......

Elvis Costello came into the shop today and bought himself a beautiful vintage Smith-Corona typewriter. A great writer with a great writing machine.
Photo: Bob Fonseca.

From "The Fat Man" to "Blueberry Hill" and beyond, we look back at the late New Orleans hitmaker's finest
The one-night-only supergroup honored the early rock icon with a rousing version of his 1995 hit "Ain't That a Shame," which Rolling Stone ranked Number 438 on our list of the 500 Greatest Songs of All Time. Costello belted a soulful lead vocal, with Dr. John chiming in on the second verse and Trombone Shorty adding a silky solo.

Domino, a contemporary of early rock architects like Elvis Presley and Chuck Berry, died from natural causes Tuesday at age 89. The iconic singer-songwriter made one hour-long Austin City Limits appearance in 1987, performing a string of hits, including his signature "Blueberry Hill," featured below.

Domino's peers and those he influenced have paid tribute to him in recent days. "His voice, piano playing and musical style was a huge influence on us," Paul McCartney said. "As one of my favourite rock ‘n’ roll singers, I will remember him fondly and always think of him with that twinkle in his eye."

"It was a very upsetting day to hear about my dear friend Fats," Jerry Lee Lewis said in a statement. "We spent many good times together, from rockin' on the road to spending time in each other's homes for a good downhome country dinner. We're both piano players from Louisiana. I love him, and now I miss him."

"He could make a piano talk," Little Richard tells Rolling Stone. "He could play anything. He's not just a banger. He could really play for real."
Since you put me down, it seems i've been very gloomy. You may laugh but pretty girls look right through me.
Top

https://www.stereogum.com/1969395/watch ... ino/video/
Since you put me down, it seems i've been very gloomy. You may laugh but pretty girls look right through me.
Top

After more than three hours and enough opera, country, and fonk to fill three separate Austin City Limits tapings, the most important induction at Wednesday evening’s fourth annual Hall of Fame concert from the local live music beacon singled out the one honoree without an accompanying musical set: the 50th anniversary of the Public Broadcasting Act.

“If my grandfather was here, he’d think this was a great, great party,” offered Catherine Robb, granddaughter of President Lyndon Baines Johnson, who signed the measure into law. LBJ Foundation executive director Amy Barbee then pointed out that the full-house gathering inside ACL Live at the Moody Theater proved the law’s efficacy.

Indeed, one could imagine an entire television special dedicated to the November 1967 establishment of the Corporation for Public Broadcasting, which birthed PBS and by extension ACL. The Flatlanders, who the Stonewall-born 36th U.S. Commander-in-Chief famously witnessed during the inaugural Kerrville Folk Festival, could star, with attendant Lone Star country and folk all-stars building to the climax. In attendance already at last night’s HOF presentation was LBJ’s daughter Luci Baines Johnson.

Instead, another epic awards special, broadcast every New Year’s Eve, staged a show whose initial two-thirds might have merited some sort of federal proclamation from Johnson. Wink native Roy Orbison and Nashville’s first daughter Rosanne Cash branded the first half of the program in trademark ACL style. Master of ceremonies Chris Isaak practically relegated the late Dick Clark to a high school talent contest judge with unflagging humor, self-deprecation, and genuine enthusiasm.

Isaak, Brandi Carlile, and Raul Malo took turns paying vocal homage to Orbison’s baritone tenor both separately and together. Where the latter Mavericks frontman visibly mustered his smooth Miami croon to climb “Crying” and the lady of the grouping came closest to evoking the otherworldly falsetto from the Traveling Wilburys’ operatic heart, the night’s emcee stole the spotlight with goose-bump-inducing solo vocal tremors on “Only the Lonely” and even in unison with Carlile on “Dream Baby” and “Oh Pretty Woman,” which also brought back Malo. Only 1-year-old Roy Orbison III, onstage with his father, two uncles, and only other fellow grandchild to accept the trophy, radiated more natural charisma.

The Rosanne Cash segment next set off equal fireworks as guested by Elvis Costello, Neko Case, and Ry Cooder. The English New Wave star of yesteryear fell prey to ego in choosing a lesser composition he co-composed, and at first, his Canadian co-star and New Pornographer scooted too quickly through Cash’s sublime “What We Really Want is Love.” Johnny Cash’s son-in-law, Rosanne’s husband of 22 years, John Leventhal – as canny a producer, guitarist, and musician as his wife is a singer-songwriter – rightly called for a re-do, which Case then nailed. Guitar whisperer Ry Cooder strolled onto the bandwagon for a sultry, stately reading of Cash & Leventhal’s exemplary rhyme “A Feather’s Not a Bird,” whose encore “Seven Year Ache” beat the heart of five guitars: Cooder, Costello, Leventhal, and backing bandmembers Lloyd Maines and David Grissom.

After the intermission and a tip of the ivories to Fats Domino by ACL brass, Elvis Costello again had the misfortune of being miscast in leading an off-key rendition of the Fat Man’s “Ain’t That a Shame,” kick-off tune to the third and final ACL taping alum tribute – New Orleans’ Neville Brothers. All five Crescent City kings survive, but none showed, ceding a 45-minute performance to their sons, nephews, bandmembers, and ace ringers Trombone Shorty and Dr. John. “Brother Jake,” a scorching “Fire on the Bayou,” and grand finale “Down By the Riverside,” which brought back Isaak, Carlile, Costello, and Malo, bounced and brassed (hello Grooveline Horns) a dwindling, wrung-out full house right out the front doors. 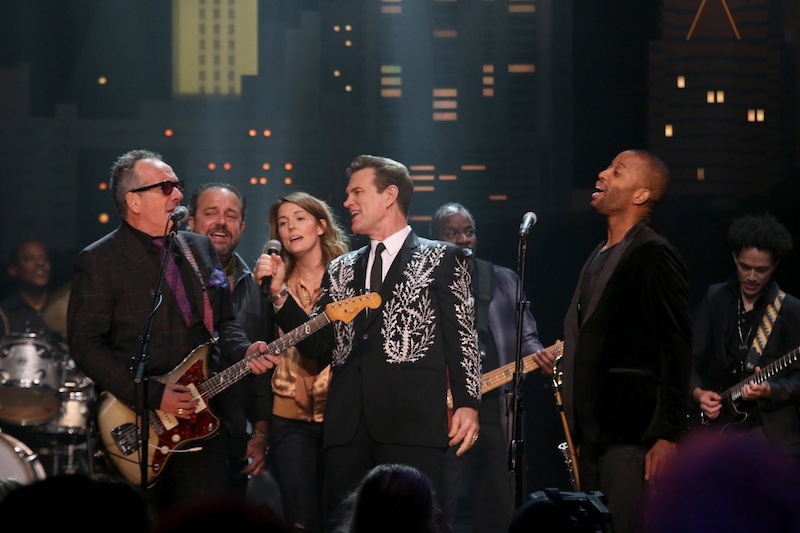 http://music.blog.mystatesman.com/2017/ ... -brothers/
Since you put me down, it seems i've been very gloomy. You may laugh but pretty girls look right through me.
Top

Do you think Raoul Hernandez isn't much of a fan ?

The Rosanne Cash segment next set off equal fireworks as guested by Elvis Costello, Neko Case, and Ry Cooder. The English New Wave star of yesteryear fell prey to ego in choosing a lesser composition he co-composed, and at first, his Canadian co-star and New Pornographer scooted too quickly through Cash’s sublime “What We Really Want is Love.”

After the intermission and a tip of the ivories to Fats Domino by ACL brass, Elvis Costello again had the misfortune of being miscast in leading an off-key rendition of the Fat Man’s “Ain’t That a Shame,”

As Austin City Limits prepares to finish off its 42nd season, the show is putting an exclamation point on 2017 with one of its newest traditions: the ACL Hall of Fame induction broadcast. This year's inductees include Roy Orbison, the Nevilles, and Rosanne Cash, who you see perform her hit song "Seven Year Ache" with the help of Neko Case, Elvis Costello, and Ry Cooder in the video above.

Of the three inductees in this year's Hall of Fame, Cash has a particularly long history with the show, have made six appearances on the venerable Austin, Texas program since she made her debut in 1983, the same year that Orbison made his one and only appearance. "Seven Year Ache" was Cash's first country Number One two years prior to her first visit to ACL, and also her lone pop top 40 hit. Case and Costello – who was on hand to induct Cash – contribute vocals, while Cooder's guitar solo helps close out the rollicking rendition.

Cash expresses her gratitude for ACL's earlier championing of her work in her acceptance speech, and explains how that support helped her step of her famous father's long shadow. "They took me seriously when I was uncertain whether anyone ever would. When I thought I just had to keep my head down and just show up for work and try to be a better songwriter and when I felt that most people were just looking through me to try to see my dad," she says. "You know, I could have never even admitted that back then. But [executive producer] Terry Lickona and the whole team at ACL, they didn't look through me."

The ACL Hall of Fame ceremony was held October 25th at the Moody Theater in Austin, but will be broadcast this Sunday, December 31st at 10 p.m. CT on PBS.
Since you put me down, it seems i've been very gloomy. You may laugh but pretty girls look right through me.
Top

http://music.blog.mystatesman.com/2017/ ... he-ticket/
Since you put me down, it seems i've been very gloomy. You may laugh but pretty girls look right through me.
Top

You can watch the entire show here:

Live From Lincoln Center The New York Philharmonic celebrates New Year's Eve with waltzes and polkas by Johann Strauss II and works by Stephen Sondheim, Kander & Ebb and Alexandre Desplat, and a special performance from Renée Fleming, in the season finale. 9 p.m. KOCE and KPBS

New Year’s Eve Specials Anderson Cooper and Andy Cohen kick off a full evening of coverage on CNN at 5 p.m.

Maria Menounos joins host Steve Harvey for “New Year’s Eve With Steve Harvey.” The Fox network’s second annual live broadcast special from Times Square in Manhattan features a performance by Sting, and by Florence + the Machine, Jason Aldean, Juanes and Why Don’t We. 8 and 10 p.m.

New Year's Eve Director Garry Marshall assembled a top-notch ensemble cast in this 2011 comedy starring Hilary Swank as the executive overseeing the traditional ball drop in Times Square. Also starring are Sarah Jessica Parker, as a mother concerned about her teen daughter’s (Abigail Breslin) plans, and Robert De Niro as a hospital patient. Halle Berry, Lea Michele and Jon Bon Jovi are among the many others on hand. 2, 4:30, 7 and 9:30 p.m. E!
Top
Post Reply
20 posts • Page 1 of 1